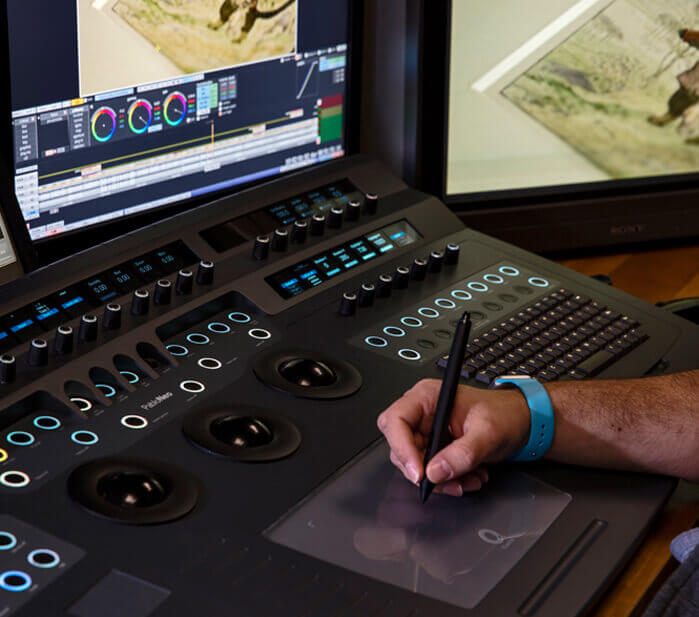 XTFX were suitably impressed when we dropped in to check out the progress of The Other Planet’s flagship finishing suite, nearing completion at their Leeds premises.

Having knocked several rooms together, the space they’ve created is imposing, to say the least, rivalling anything on offer in Soho.

The centerpiece of the suite is SAM’s Quantel Rio Version 3, with the Neo control panel running on the latest
2016 hardware. Company director Phil Bedwell is chuffed with their new acquisition: “I believe we’re the first
in the world to install this generation of hardware. It’s fresh off the R&D production line and we’re very pleased with the performance.”

Taking advantage of Quantel Rio’s scalability, Phil has turned it up to 11, installing an additional NVIDIA GPU for good measure. A Barco projector completes the picture.

They’re currently in post on MoliFilms’ ’Gloves Off’ a gritty comedy drama about boxing in the traveler community shot in local studios. “We’re editing at the moment with finishing and delivery early in 2016”, says Phil. Further feature film and drama projects are scheduled to follow in quick succession.

Head of Operations Chris Davey explains the thinking behind the expansion:

“We were looking at it from a client perspective initially. We’re seeing more and more people looking at Leeds as a place to base their productions.”

The Leeds scene is buoyant, with new production companies and studio installations. Screen Yorkshire funding provides additional stimulus, and client expectations are rising. “DOPs, particularly on features, are looking for more of a cinematic client experience with a 4K pipeline and projection. For us it’s about saying ‘yes’, providing the best we can and offering something that isn’t currently available in the north.”

The Other Planet have built and maintained relationships with indies based in Leeds. “While they’re not
as numerous as in Manchester they tend to stick with us. They like the fact that every time they return there’s a perceptible improvement and evolution in the service and that’s based on their feedback.”

The client-centered approach is paying off: “Word is getting out to other production companies, hence the expansion”, says Chris, “The knowledge that we can deliver gives our clients the confidence to base themselves here”. Storage infrastructure is provided by Elements with plans to expand on the current 96TB capacity in 2016, also acting as a nearline to the Quantel Rio which will use its own attached storage for the interactive 4K work.

A realtime 4K backbone is a key component of Phil’s strategy for the future:

“While a large part of our work is still delivered at 2K, we find productions now are future-proofing themselves by shooting 4K. One of the real selling points of Quantel Rio for us is the real time 4K workflow and the interactive color tools work really well.”

The Other Planet service the full gamut from commercials to factual, TV drama and cinema. Recent documentaries projects include ‘The Yorkshire Vet’ and ‘Body Donors’ (Channel 5) for Daisybeck Studios, and ‘India’s Frontier Railways’ (BBC 4) for 3Di Television and they recently completed Kay Mellor’s drama ‘The Syndicate’ (BBC 1) for Rollem Productions.

Phil sees quality long form as a key driver for business growth: “Our speciality
has always been high end drama, but interest from film makers is ramping up so the new build is part of that evolution.”

Full service post is amply resourced; 8 Avid systems handle offline editing and offer flexibility to documentary makers on tighter budgets, with a Nuke pipeline for VFX and After Effects for motion graphics.

While the more time-consuming VFX work broken out to the Nuke pipeline, Phil finds Quantel Rio’s versatility builds on that of The Other Planet’s existing eQ and Pablo systems, enabling the team to carry out increasing amounts of paint, retouching and fix work interactively in the finishing suite. “It does exactly what you want it to do, and the capability to output real time is a big plus. We don’t have to stop and render.”

As a seasoned Quantel user, Phil cites support as a key factor in his decision to continue investing in SAM technology:

“The support over the years has been very good, unlike some other vendors.”
Chris: “There’s a relationship there.”

Phil: “Definitely. You’re dealing with engineers who you know by name, and you can have a real conversation with them. What’s also brilliant is that if they don’t know they’ll admit it, and commit to find out. Our experience with many other vendors is that you can end up hitting a brick wall.”

Chris: “The support team at SAM really understand the pressures. They’re aware that you may well have a client in attendance.”

While Phil and his partners have a strong technical background and are largely self-sufficient engineering-wise he appreciates.

”Having SAM support at the end of the phone. It gives us confidence when we’re under pressure.”

He also looks forward to cross- pollination between Quantel and Snell technologies:

“I’d like to see closer integration, for example, between Alchemist XF and Quantel Rio for retiming, standards conversion and international delivery. Snell and Quantel were two great cornerstones of British engineering for our industry. It will be great for them to have a more joined-up mentality product-wise.”

He’d also like to see a renewed focus on graphics tools, appreciating Quantel Rio’s versatility and the way in which
it has eroded traditional boundaries. When asked if he sees himself as a colorist, Editor or VFX Artist, Phil laughs, “I’m a human being; these definitions are being blurred by technology and for financial reasons.”

Phil and Chris firmly believe that the key to effective finishing is building a relationship with the DOP.

Chris: “We’ve noticed a drop-off in client attendance compared to the old days. In general clients trust us to get everything sorted and come in for review and approval. The exception is DOPs who remain closely involved in the grade.

Phil: “Some DOPs feel that they have got close to what they want in camera so we tidy up and move on, while others want to be more expressive in the grade and have a creative conversation.”

Whatever their approach, a treat awaits DOPs in The Other Planet’s uncompromising finishing suite, bringing a Soho-style client experience to the North for the first time.